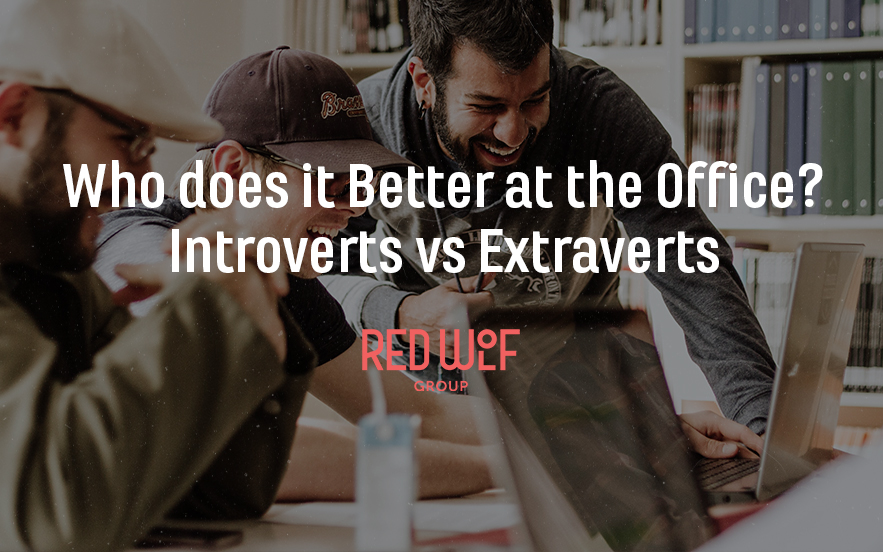 This article is the second installment in a four-part series on understanding the different behavioural drives to create a culture of teamwork at the office.

It goes without saying that in any workplace, social interaction is not only necessary but more often than not, essential to a business’ daily operations.

Understanding how different types of people react to social stimulation is vital in not only ensuring success, but also in the fulfillment of each unique individual on your team.

Enter the Extraversion drive, or what The Predictive Index refers to as the drive for social interaction with other people.

But before we go any further, I want to make sure we clear out any confusion. I always hear people ask me (often with a puzzled look on their face) about extraversion and extroversion and whether or not there’s any difference between the two—apart from spelling.

The short of it is that in the science and field of psychology, extraverted—spelled with an “A”—has always been and remains to this day the generally acceptable way of spelling it. It’s counterpart, extoversion, is believed to be a common misspelling, albeit acceptable in today’s standard, and is used interchangeably with the same effect.

If you’d like to investigate this further, there’s an entire article by our friends at The Predictive Index talking more about the history and etymology of the word here.

When it comes to extraversion, people generally fall under two sides of a scale: high-extraversion and low-extraversion.

For highly-extraverted employees, it’s all about being in on the action—especially if it involves other people.

Their genuine interest in others can also be interpreted as a desire to interact and be involved in whatever type of situation they find themselves in, be it in a meeting, team project, or heck, any office celebration that calls for a party.

If there’s a chance to mingle with co-workers, you can count on your highly-extraverted employee to be there. As a manager, it’s important to use this to your advantage by allowing them the chance to do so.

Since they’re generally excited to voice out ideas and collaborate, highly-extraverted people often bring good energy into meetings and brainstorming sessions as their infectious enthusiasm helps get the ball rolling and the creative juices flowing, making it easier to jumpstart a productive discussion.

In addition, since they desire interaction, you can feel free to engage them through constant check-ins to follow up on progress. It’s also important that they’re given lots of feedback and affirmation to give them the confidence they need to keep going.

Another popular term used to describe this type of employee is introverted. However, we at Red Wolf prefer and recommend our clients to use the term low-extraversion or introspective, instead, as it more accurately describes this type of personality—sans the negative connotations and misconceptions people often associate with the former.

For low-extraversion types, prolonged social interactions can be draining; often described as quiet, serious, or on the extreme, non-communicative, they aren’t driven by the need for social interaction at all.

Being introspective also means that being in a private space (like a room or quiet area on the floor) gives them the headspace they need to process ideas thoroughly. And while maintaining relationships in the office isn’t their priority, they are careful and sincere when interacting with others—despite their analytical and matter-of-fact demeanor.

Low-extraverted employees also aren’t about completely shutting themselves out of the social world like people think. In fact, you’ll often find them thrive in a smaller-sized team where they’ve had enough time to build a sense of trust among their peers.

Being a  manager, it’s important to know that placing low-extraverted employees in more isolated roles with plenty of alone time and space to work by themselves is key for them to produce their best results.

A good rule-of-thumb is to keep them well-informed of your plans for interaction and avoid “surprise visits” at all costs. Instead, allow them to plan in advance for it. For example, it would be better to send a meeting invite a few days prior with an agenda you’d like to discuss versus dropping by their desk to quickly flesh out at idea.

At the end of the day, being on one end of the extraverted scale doesn’t necessarily guarantee better performance in the workplace than the other, and part of a manager’s role is to identify the unique characteristics that make up each individual.

That’s where tools like the Behvaioural Assessment Test from The Predictive Index come in. Together with tailored trainings and workshops, resource materials, and expert consultation, Red Wolf Group provides a full-circle talent optimisation approach that can help businesses and teams of all sizes understand workplace behaviours better.

Try it for yourself and take the FREE Behavioural Assessment Test today. For more inquiries, email me personally at alicia@redwolfgroup.com.au, or call 0414 687 071.

Fill up the form to begin